What goes up must come down

What goes up…must come down…

You might have caught our series of posts on Facebook last week celebrating all things “moon” for the 50th anniversary of man first walking on the moon. 🌘

Well, of course, they had to come home again!

Once Armstrong and Aldrin had taken off from the moon and reconnected with Collins in the command module Columbia, they disconnected the lunar module Eagle (which eventually crashed on the moon after orbiting it for a while). 🛰️

There are a few things going on here. Of course, there’s gravity at play, but also friction and drag, or air resistance. The good thing is that this resistance slows the spacecraft down to a safer entry speed, but the other factor is that it causes intense heat (around 1600 degrees Celsius!). On Apollo, there was a special coating of material that burned up on re-entry, absorbing the heat and protecting those inside.🔥

All went well, and Columbia splashed down in the Pacific, 1,500 km southwest of Honolulu, and just 24km from the recovery ship USS Hornet. When the rescue team arrived, they handed the crew isolation suits and sprayed them with disinfectant, just in case they’d brought back any microbes from the moon.

The crew then were quarantined for a couple of weeks, and cleared customs in Hawaii, declaring their goods – moon rocks, moon dust etc…the usual things you declare when you come back from a trip… There are some truly terrifying sets of chompers on some creatures in the...

Some animals have some really cool and often quite deadly defense mechanisms.... 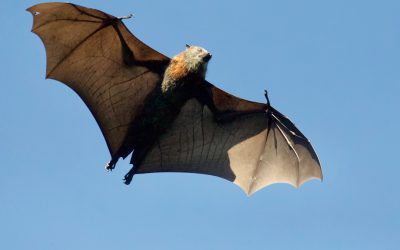